Messina, Italy is a charming city on the island of Sicily in the Mediterranean Sea. It is often a port of call on many cruise line itineraries. If you do not have a shore excursion planned (or even if you do) and just want to explore on foot or by horse-drawn carriage, be certain to be in the square in front of the Messina Duomo Cathedral at noon.

Prepare yourself for an engrossing twelve minutes amongst a throng of people just like yourself who have come to see the famous mechanical and astronomical clock in the church’s bell tower. This clock, designed by Ungerer of Strasbourg, France, is the largest and most complex clock of its kind in the world.

As the noon hour commences so do the various pieces of this amazing mechanism. The lion’s tail moves, he waves his flag, and he roars*. Then the figures in the windows – and there are many openings and bronze figures – begin to rotate or move. Each figure has a meaning or association. This lion represents Messina, and its strength. The rooster directly below represents awakening. It moves as well with wing flaps, and head lifts. It also crows after the lion roars. Two statues of women either side of the crow signal the hours and quarter hours by beating on the bells. These two are actual historical figures: Dina and Clarenza who saved the city from a surprise attack from Saracens during the Vespers war siege in 1282.

The Carousals & Other Movements

In the centre of the bell tower below the rooster is another opening featuring a moving tableau of figurines. These are an angel, St. Paul and three ambassadors of Messina who appear and disappear through “doorways” around the static figure of the Madonna della Lettera. The Madonna supposedly sent a letter to the city offering eternal protection via the ambassadors sent by St. Paul to her in Jerusalem. These figures also bow to the Virgin before rotating on.

Yet another mechanical symbol appears on the bell tower: the church of Monalto rises from a rocky hill and a dove circles it in flight. This scene depicts the story of Fra Nicola, his vision, and the building of the Monalto church in 1294.

Biblical scenes are depicted in another scene of the face of the tower. These change according to the time of year so you will only see one when you are there. There are four such scenes: The adoration of the shepherds (Christmas to Epiphany); adoration of the Magi (Epiphany to Easter); the resurrection (Easter to Pentecost); and decent of the Holy Spirit (Pentecost to Christmas).*

Besides the clock, there is a “clock face” or planetarium of the planets showing the astrological symbols. And there are four, hour dials, one to each side of the tower. Above the planetarium there is a depiction of the moon divided into dark and “gold” phases which rotates mimicking the movement of the actual moon. It revolves once every twenty-nine days, twelve hours, etc. And closer to ground level there is a perpetual calendar clock with an angel pointing a spear at the day of the month of the year. It changes at midnight.

All these movements happen at noon to the sound of Schubert’s Ave Maria.  It is truly breathtaking – but impossible to catch all that is happening at once unless you know where to look.

Be at the square early to get a good position to see all the movements. You can also take a tour of the bell tower for a reasonable fee of four euros, adult pricing (at current fees) and see the mechanical works behind the display. Open times vary so check before you go if this is on your wish list. The outside view is free!

*See and hear the lion in the video below. 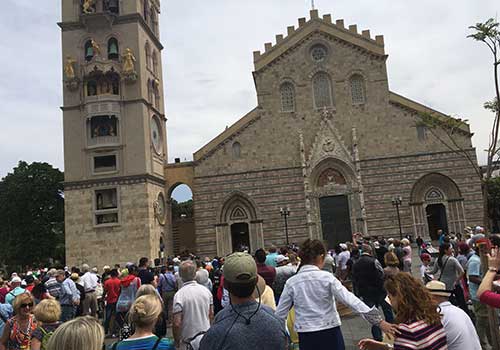 Crowds at Noon at the Messina Duomo Cathedral (Image:Compass Media)

The Lion That Roars and Moves (Image:Bigstock) 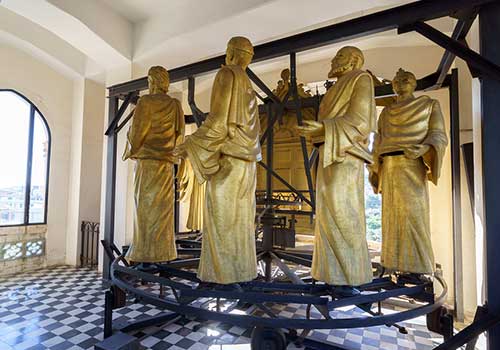 Inside View of the Madonna della Lettera Carousal (Image:Bigstock) 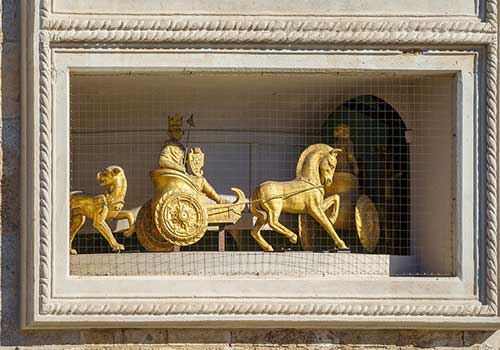 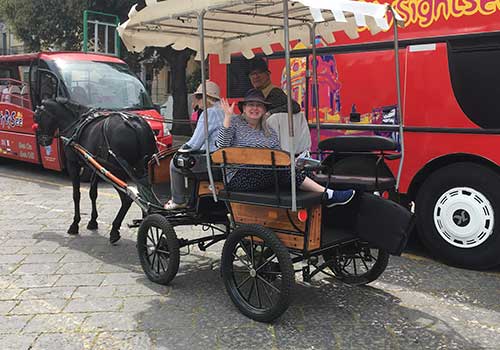 The Author in Horse Drawn Carriage at the Bell Tower (Image: Compass Media)